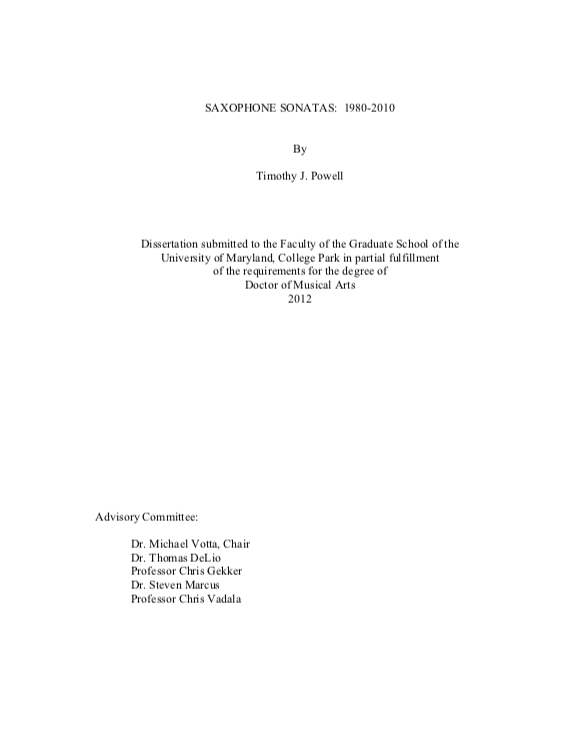 The purpose of this dissertation project identifies contemporary solo saxophone literature, specifically sonatas between the years 1980 and 2010. The overwhelming majority of repertoire written during these thirty years consisted primarily of either multi-movement or through-composed character pieces. By limiting the selected repertoire to sonatas one can still investigate the breadth of the literature that has helped validate the saxophone in the realm of classical music in a format that has seemingly fallen out of favor with composers.

The saxophone had developed a unique voice by the middle of the twentieth century in both Europe and in the United States. European composers such as Claude Debussy, Florent Schmidt, Jacques Ibert, Darius Milhaud, Alexander Glazounov, Erwin Schulhoff and Bernard Heiden recognized the potential and beauty of the instrument, while the saxophone had found quite a different niche in vaudeville, jazz, and military bands in the United States. If not for the dynamic performances by concert saxophonist such as Marcel Mule, Sigurd Rascher, Jean-Marie Londeix,

Daniel Deffayet, Cecil Lesson, Larry Teal, Eugene Rousseau, Fredrick Hemke and Donald Sinta, the timbral possibilities and technical virtuosity of the saxophone would not have been discovered. The awe inspiring performances by these soloists led to the commissioning of a multitude of works by composers looking to expand the sonic possibilities of this relatively new instrument. Through the 1970’s American composers such as Leslie Bassett, Paul Creston, Henry Brant, Robert Muczynski, and Karel Husa were writing significant works for the saxophone, while European composers such as Ingolf Dahl, Edison Denisov, Alfred Desenclos, Henri Tomasi and Marius Constant were each making their own contributions, all leading to a significant quantity of repertoire that met the quality demands set by the performers.

The compositions chosen for this dissertation project were selected after numerous performance, pragmatic, programming and pedagogical considerations were taken into account. The three recitals occurred on: March 7, 2010, December 10, 2010 and May 1, 2011 in either the Gildenhorn Recital Hall or Lecture Hall 2100.