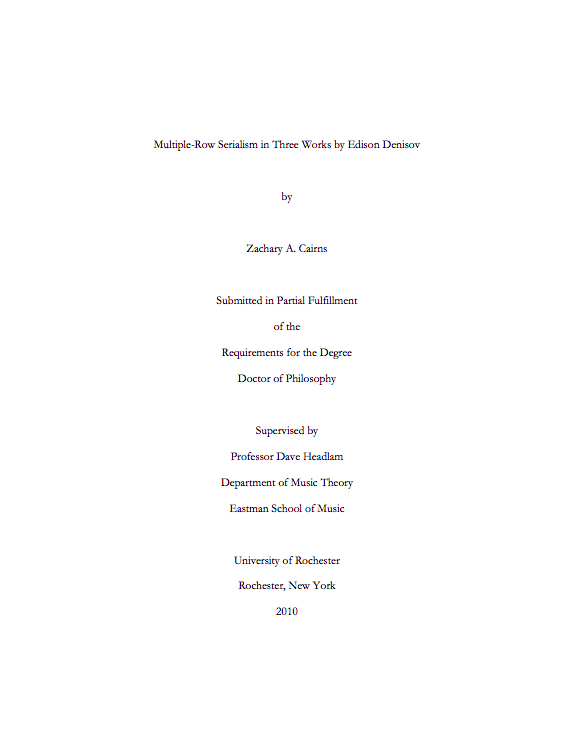 The music of Russian composer Edison Denisov (1929-1996) has not been widely studied by music theorists in the United States. He was one of the student composers who came of age in the Soviet Union during the period following Stalin’s death. During this time, young composers began experimenting with some of the modernist approaches to composition found in Europe and America. In this dissertation, I have chosen to focus on one specific aspect of Denisov’s approach to serial composition. My goals are twofold.
First, my fundamental objective will be to give analytical attention to what I strongly believe is an important, though neglected, repertoire. Second, the dissertation explores technical issues involving multiple-row serialism in general, and demonstrates the utility of my own analytical approach developed in the study of this music.

The dissertation is divided into two large parts. The first, comprising Chapters 1-3 serves to set up a music-theoretic backdrop against which Denisov’s serial music might be profitably examined. Chapter 1 gives the reader a sense of the cultural, political and societal situation in which Denisov and his student colleagues found themselves. This chapter also provides some general comments about Denisov’s highly varied compositional style over the course of his career. Chapter 2 presents an annotated translation of a chapter from Svetlana Kurbatskaya’s book, Seriynaya muzïka: voprosï istorii, teorii, estetiki [Serial Music: Questions of History, Theory, Aesthetics]. Written in 1996, this book has the interesting distinction of being the first Russian-language book dedicated entirely to the topic of serial music. This chapter also uses many of Kurbatskaya’s concepts in an analysis of Andrey Volkonsky’s piece Musica Stricta (1956-1957). Generally accepted as the first piece of serial music composed in the Soviet Union, this piece occupies an important place in the history of Soviet music, and is one that Denisov knew well. In Chapter 3, I move to a discussion of some of the general issues of multiple-row serialism. Within this chapter, I introduce a new analytical device, the interval-class succession graph, which can illuminate Denisov’s music by offering a way of conceptualizing the structure of a twelve-tone row which heretofore has been unexplored.

Chapters 4 through 7 make up the second part of the dissertation: the analytical discussion of three specific pieces involving multiple twelve-tone rows. The pieces are the following: the first of Five Etudes for Solo Bassoon (1983), and the finales of Sonata for Alto Saxophone and Piano (1970) and Octet for Winds (1991).

The development of the saxophone 1850-1950: its influence on performance and the classical repertory by Abraham Albertus de Villiers