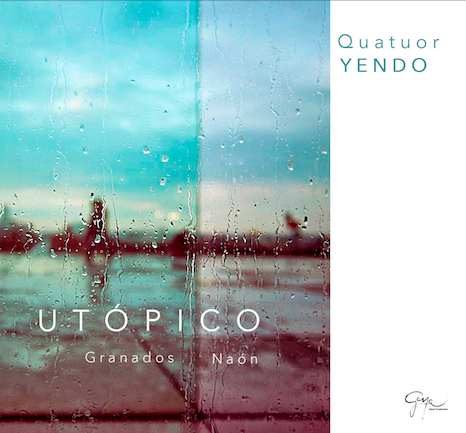 In September 2015, Gaëlle Le Gallic invited us on “France Musique” during her broadcast “Génération Jeunes Interprètes” where we had the opportunity to present our project around the “Danzas Españolas” with Baptiste Herbin.

Whilst adapting Enrique Grandos’s “Danzas Españolas” originally for piano, we met Argentine composer Luis Naòn, this led to the commissioning of a series of dances (co-commission from Radio France). From this our project “Utópico” was born, mixing romantic and contemporary music and providing a relation between two styles of music which are very different. In both the twelve “Danzas Españolas” of 1890 and the five “Tangos Utópicos” of 2015, popular music is an important inspiration. We soon had the idea of mixing these two pieces together to make our first CD, following our concerts at the festival SaxOpen in Strasbourg 2015 the jazz saxophonist Baptiste Herbin gave a third dimension to the project with improvisations over the dances of Granados. His virtuosic poesy joins us on several tracks completing what is an exceptional “crossover”.

Regularly invited to perform on “France Musique”, the Yendo Quartet has rapidly become known for it’s strong identity. United by a common musical ideology from the quartets multiple European origins, was born a project to adapt for their formation the “Danzas Españolas” for piano by Enrique Granados. In parallel the quartet commissioned a new work from Argentinian composer Luis Naón, a series of dances that can be played alongside those of Granados. A co-commission of Radio France, the premiere of “Tangos Utopicos” took place in October 2015 on Radio France during Anne Montaron’s broadcast “Alla Brève”. The project was presented for the first time integrally at L’Hotel de Soubise, Paris for the association “Jeunes Talents” in February 2016 and finalised by a studio recording in December of the same year.

After several performances at the “Cité Internationale Universitaire de Paris”, Yendo interpreted Phillipe Geiss’s concerto “United colors of saxophone” at the Joseph Kosma auditorium, CNRR de Nice with the city of Nice Wind Orchestra. In June 2015 the quartet was awarded 2nd prize at the International saxophone quartet competition in Strasbourg, SaxOpen. Following this they performed notably at the festivals of Vigan, Moissac, La Baule and d’Aulnay as well as in Alsace at Domain Gross. Their performance in Gaëlle Le Gallic’s broadcast on France Musique in September 2015 allowed them to continue there collaboration with virtuoso jazz-man Baptiste Hérbin, realising a “crossover” mixing romantic music with improvisation.