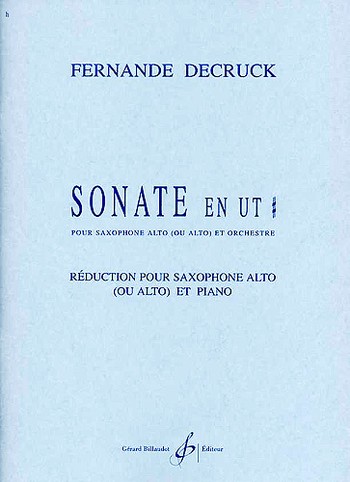 Cain, Joren. Rediscovering Fernande Decruck’s Sonate en ut# pour saxophone alto (ou alto) et orchestre: A Performance Analysis. Doctor of Musical Arts (Performance), May 2010, 166 pp., 89 musical examples, 31 tables, bibliography, 45 titles. French composer Fernande Decruck (1896-1954) composed over forty works for the saxophone, but her music fell into obscurity soon after her death. In recent years, the Sonate en ut# pour saxophone alto (ou alto) et orchestre (1943) has been rediscovered, performed, and recorded by prominent concert saxophonists. This document takes a historical approach by examining Decruck’s biography, as well as a theoretical approach to provide a deeper understanding and appreciation of her work through analysis. The first four chapters of this document provide biographical background on Decruck, her career, professional associations, and her husband, Maurice Decruck, saxophonist and music publisher. Additionally, an examination of her saxophone output includes a brief discussion of her compositional development. Fernande Decruck dedicated her sonata to French saxophone virtuoso Marcel Mule, but a version for solo viola also exists. From the discrepancies between the versions, one might infer that portions of the work were composed originally for the viola. There are also two versions of the accompaniment: one for full orchestra and the other for piano. Analysis comprises the bulk of this study. The work is composed in a traditional four- movement setting: a sonata-form opening movement, a slow second movement, a movement entitled “Fileuse” (spinning song), substituting for the traditional scherzo, and a rondo-like finale. The work incorporates trends of Impressionism through its harmonic vocabulary, chordal planing, and pentatonic scales. It also demonstrates a sophisticated application of polytonal techniques in several passages.
In addition to analysis of each movement, common interpretive practices are discussed, based upon available commercial recorded performances, and performance suggestions are given. There are several notation errors within the parts, as well as some significant differences between the two accompaniments. These errata and discrepancies between the solo parts are listed and discussed.

READ THE FULL DISSETATION AND ANALYSIS.

#COVID-19 & Saxophone: How does coronavirus (COVID-19) affect the saxophone? Preventive measures, cleaning and sanitizing your saxophone