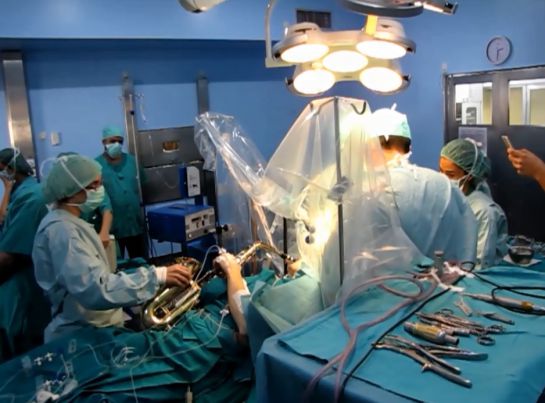 Carlos Aguilera, a professional musician, played the concert of his life on October 15.

But he was not on stage in front of thousands of people. Instead, he was inside an operating room at Málaga Regional Hospital, where a team of doctors spent 12 hours removing a tumor from his brain.

The 27-year-old patient played his saxophone at various moments before and during the surgery to help medics monitor the areas of the brain involved in musical language.
In a pioneering procedure in Europe, Aguilera played fragments from Misty and You and I to stimulate these areas and help protect them from potential damage during the surgery.

Mapping the cerebral cortex involves using electrical stimulation to find the regions involved in language and motor functions and ensure they are not damaged. The patient is not placed under general anesthesia, but remains sedated and awake, actively collaborating by naming objects or counting numbers in order to activate the regions that doctors are looking for.

The Málaga Regional Hospital had already performed 12 procedures of this kind, but in Aguilera’s case, doctors decided to use his musical training to monitor the parts of the brain involved in storing and using the language of music.

The medical team said the only precedent for this took place in a California hospital in June of this year.
When Aguilera saw video footage of the surgery later, he could not believe his eyes. “My feeling was that I’d been lying on a beach,” he said at a press conference with the 16 professionals who participated in the operation, including brain surgeons, anesthetists, neuropsychologists and nurses.

Only a month elapsed between the doctors detecting the tumor and Aguilera going under the knife. From the very beginning, a decision was made to go beyond standard mapping and seek out the brain areas that have to do with music.

“It was done this way because he is a musician and his career depends on it,” said brain surgeon Guillermo Ibáñez.

During the surgery, Aguilera performed routine tasks such as naming objects, counting to 10 and describing scenes. But more atypically, he read sheet music and played the saxophone on several occasions, including during both the pre-surgery mapping procedure and the actual removal of the tumor, which was located close to this particular brain region.

Aguilera is expected to make a full recovery after spending two weeks under observation at the hospital, said Ibáñez.
Meanwhile, Aguilera seemed emotional, nervous and grateful in equal doses, repeatedly picking up and putting down his saxophone as he took questions from the audience at the press conference on Wednesday.

“Two months ago I was lying on a stretcher and now I am born again,” he told the gathered crowd.

Aguilera has been playing the sax since the age of nine and now plays in an orchestra and has a study grant from the Málaga Municipal Band. Music is his life, he says, and he wants to make a living out of it.

To prove that the surgery has done nothing to diminish his skills, he played the same two pieces that he performed in the operating room, plus a bonus track: a personal sax arrangement of the prelude to Bach’s Cello Suite No.1.

The first (1862) chamber music in history that calls saxophone and voice, by Cressonois, a military musician