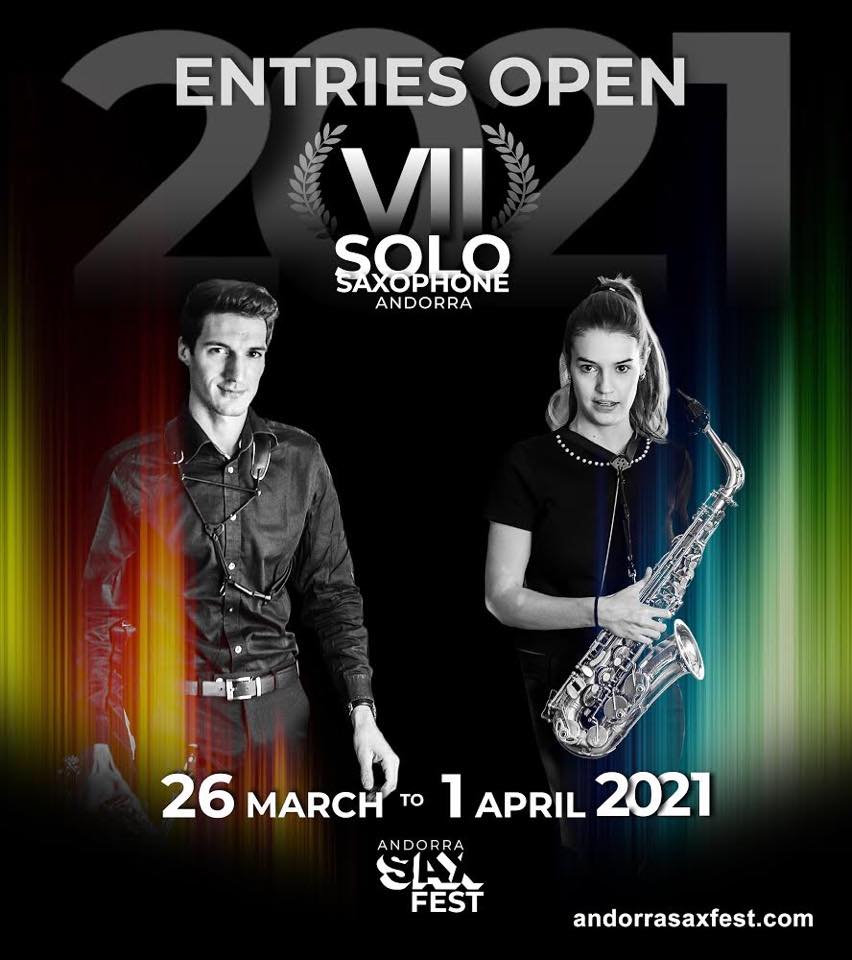 The Associació de Saxofonistes d’Andorra, organizer of the ANDORRA SAX FEST’21, announces the VII Andorra International Saxophone Competition, to be held in Andorra la Vella from March 26th to April 1st 2021, according to the present

1/ ELEGIBILITY AND REGISTRATION
The competition is open to all saxophonists of all nationalities born after March 27th 1991.
Participation can be requested using the registration form available at the official website
(www.andorrasaxfest.com).

Participation requests must attach the following documents:
a) Photocopy of passport or official identity card.
b) Recent passport photo. (MUST HAVE: white background, facing the camera, no artistic photos)
c) In case of minors, authorisation signed by parent or legal guardian.
There will be a maximum of 70 competitors. Registrations will be accepted by order of payment until January 31st 2021. There will be no refunds once the payment is received. Cancellation and refund for extraordinary reasons, will be evaluated by the organizing committee.
The submission of the registration form implies unconditional acceptance of these regulations.

2/ PROGRAME
Check-in for the competition (lanyard ID and welcome pack) will take place on March 26th 2021 from 11:00 a.m. – 7:00 pm at FNAC (Pyrénées Andorra). The official presentation and performance order draw will be held on March 26th 2021 at 7:00 pm at FNAC (Pyrénées Andorra). Competitors must be present to receive their performance time and their absence will be considered a withdrawal from the competition. In the case of not being present for extraordinary and justifiable reasons, the organizing committee will evaluate this situation and make an appropriate decision regarding their participation in the concert.

TEST IN THE COMPETITION HALL
The First Round of the competition will take place in the Auditorium of the Centre de Congressos d’Andorra la Vella.
Bearing in mind that the First Round of the competition is conducted live without prior rehearsal with the accompanist, a time will be allocated to test the hall’s acoustics that will take place on March 26th 2021 from 12:00 a.m. to 6:45 p.m. In order to enter the hall, the lanyard ID must be worn at all times.
The competition will consist of the following rounds:

FIRST ROUND
It will take place on March 27th and 28th 2021, from 9:00 AM onwards at the Centre de Congressos d’Andorra la Vella. The competitors must appear before the Competition Committee no later than 25 minutes prior to their scheduled performance.
Failure to be present at the assigned performance time will be considered a withdrawal from the competition.
Each competitor will interpret two compulsory works. The overall duration of the programme must not exceed 10 minutes. The jury will ask to terminate performances that exceed the time limit.
A maximum of 16 competitors will be chosen for the second round.
Compulsory Works:
Chant du Ménestrel opus 71………………………………………………Alexander GLASUNOW
Ed. M.P. Belaieff – Frankfurt
(Original key, free instrumentation, without previous piano rehearsal)
Étude 12 – Douze Études Caprices……………………………………………..Eugène BOZZA

SECOND ROUND
It will take place on March 30th 2021, from 8:50 AM onwards at the Centre de Congressos d’Andorra la Vella. The competitors must appear before the Competition Committee no later than 25 minutes prior to their scheduled performance.
Failure to be present at the assigned performance time will be considered a withdrawal from the competition.
Each competitor will interpret two work. The overall duration of the programme must not exceed 20 minutes. The jury will ask to terminate performances that exceed the time limit.
A maximum of 6 competitors will be chosen for the final round.
Compulsory Work:
3r mov. Sonata in A major for Violin and Piano……………………………………César FRANCK
III. Ben moderato: Recitativo-Fantasia
(Original key, free instrumentation)
Solo piece chosen by the contestant. It must be original for any member of the saxophone family. It must be published and transcriptions won ́t be accepted unless is made by the composer and it is published as well. The contestant will bring copies of the piece for the jury. It is recommended that the piece is shorter than 10 minutes. The piece could be longer than 10 minutes but the jury could stop the interpretation in the
competition once it passes the 10 minutes mark.

The following jury members will adjudicate the competition: Vincent DAVID, Nacho GASCÓN, Christophe GRÈZES, Mariano GARCÍA, Nikita ZIMIN, Philippe LECOCQ, Antonio GARCÍA JORGE, Claude DELANGLE(Final Round).
During the first meeting, the members of the jury will examine the circumstances of abstention: any juror having a teaching relationship with a competitor must declare such relationship and will abstain from voting on the competitor’s performances.
Deliberation of the jury will take place after each round. Competitors eliminated will be given a chance to discuss their results with members of the Jury.

4/ ACCOMPANIST
The competition committee will provide an accompanist for all the competitors in the First Round, without previous rehearsal.
Competitors are recommended to bring their own accompanist for the Second Round. Otherwise, the competition committee will provide an accompanist on request. The fee for this service is €30,00 for each session of 30 minutes.
Accompanist requests must be specified after entering the Second Round. Rehearsals will be scheduled right after the first round and will take place on March 29th 2021 between 8:30 AM and 18:15 PM. Rehearsals will be held in the competition hall, Auditorium of Centre de Congressos d’Andorra la Vella.

5/ STUDY ROOMS
The Competition Committee will provide 20 study rooms for all participants of ANDORRA SAXFEST’21, and especially for those competing in the VII ANDORRA INTERNATIONAL SAXOPHONE COMPETITION. These rooms are in the Centre Cultural la Llacuna.

6/ PRIZES
The following prizes will be awarded:

SECOND ROUND: 100 € for each participant who does not pass to the FINAL ROUND.

7/ SHEET MUSIC
Only legal sheet music may be used in the competition.

8/ REGISTRATION FEES
Registration for the competition is: €120,00
Registration fees payment must be made through the ANDORRA SAX FEST official website (www.andorrasaxfest.com).

9/ TRAVEL AND ACCOMODATION
Competitors are responsible for their own as well as their accompanists’ travel and accommodation expenses.
The Competition Committee, however, will provide a list of hotels.

10/ PUBLICITY RIGHTS AND INTELLECTUAL RIGHTS
By submitting the registration form, the competitor consents to the organizer using their name, biographical details and likeness in connection with the competition.
The ANDORRA SAXFEST, as organizer of the competition, is the exclusives owner of all intellectual property resulting from and related to the Competition. This includes, but is not limited to, all rights to any recordings, photography, videography and/or broadcasts/transmissions (live, delayed or future), in all current and/or future formats, nationally and internationally, of all competition rounds and performances. The competitors have no claim to compensation.
Performances of both eliminatory and final rounds will be streamed on the official homepage (http://www.andorrasaxfest.com).

11/ LIABILITY
The Competition Committee will not be liable to any accident involving the competitor arising out of the participation in the competition, neither to any losses or material damage to a competitor’s instrument and/or personal belongings.
Travel and medical insurance is recommended.

12/ FURTHER CONSIDERATIONS
In case of appeal, all written communication must be in Catalan/ English/ Spanish/ French
The laws applicable to the competition and all contractual and other rights arising from it shall be the law of Andorra.
For more information, please contact the organization at contact@andorrasaxfest.com.
Reminder: The organization of this festival reserves the right to do, in any given time, whichever modification, actualization or canceling of the acts and events programmed and advertised in any of the communication channels.