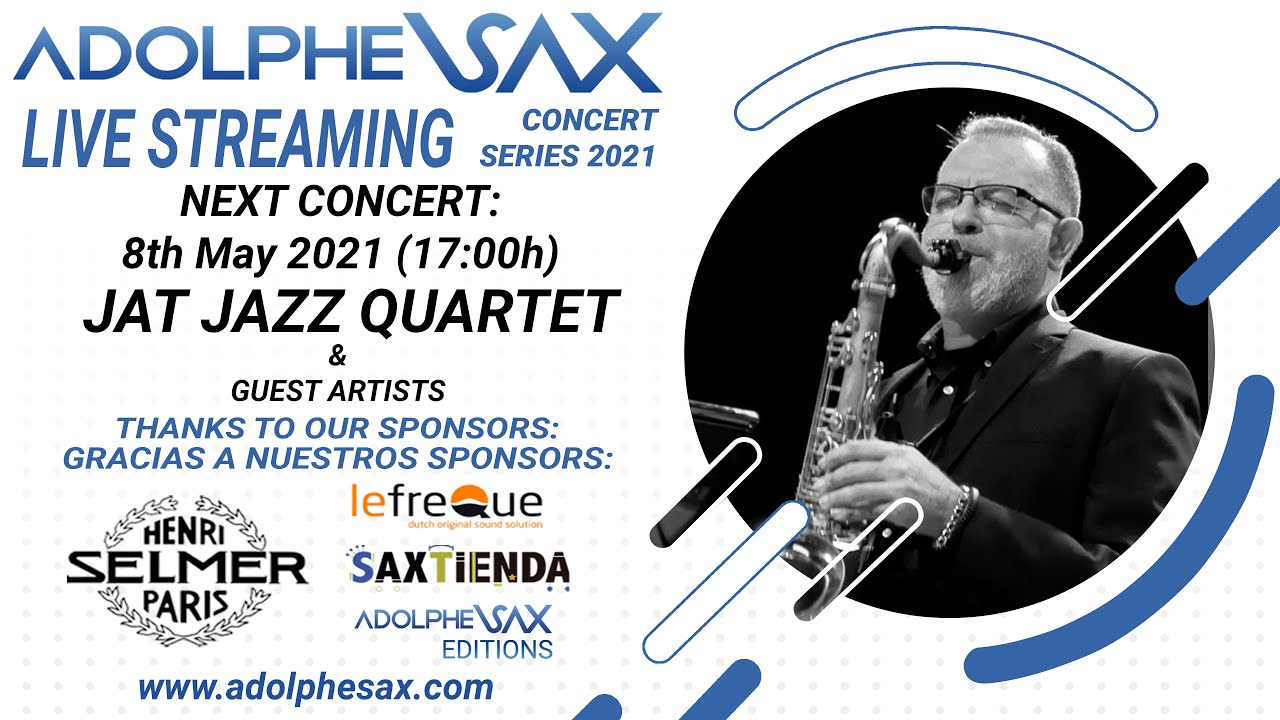 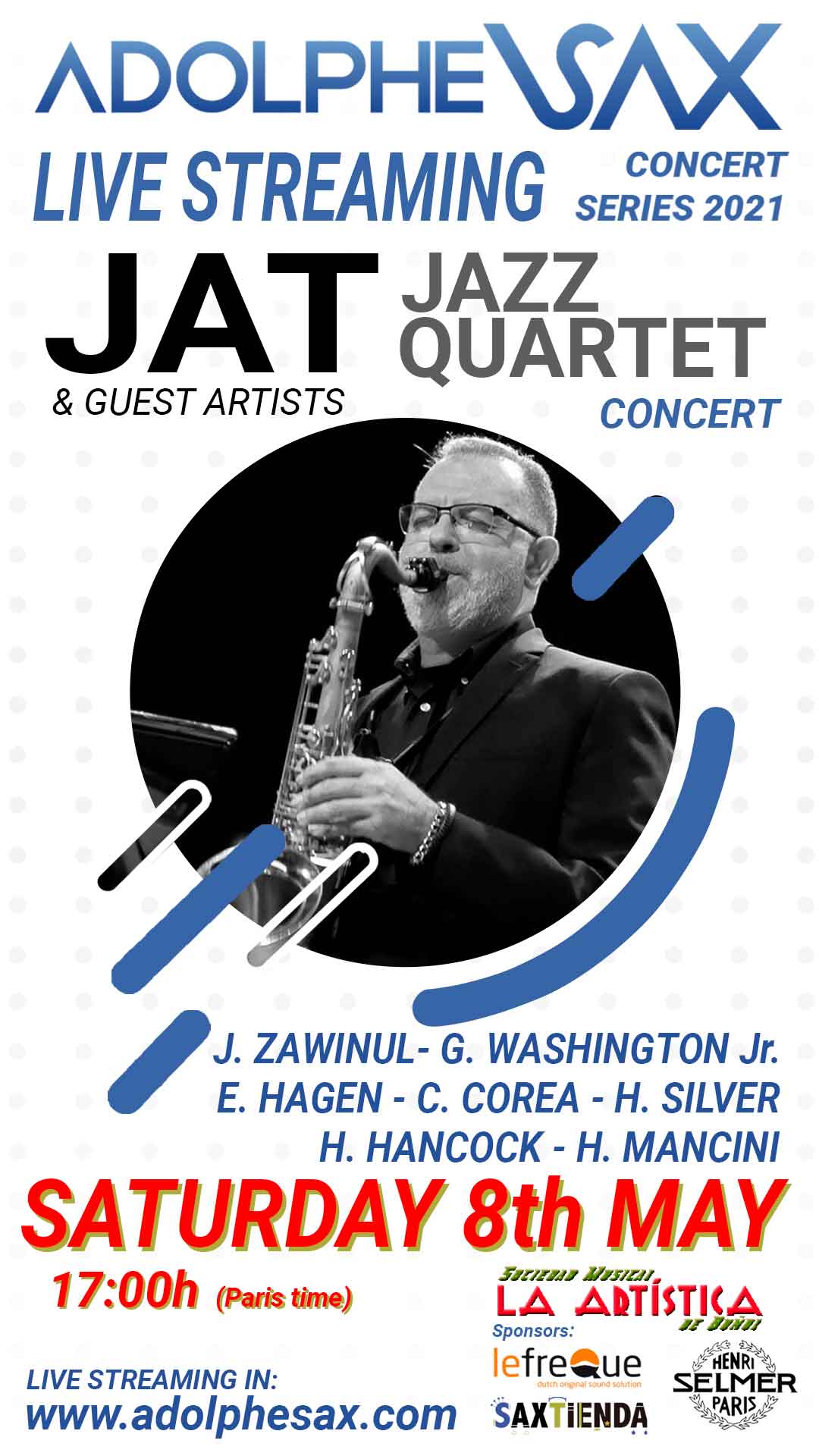 JAT Jazz Quartet
JAT Jazz Quartet is a project that rescues the color of Jazz and Cool Jazz, from the perspective of the saxophone in the history of Jazz and through a standard quartet formation, adding the colors of Latin Jazz and modernity, through its members.

Jose Antonio Tello Masmano – Alto and tenor saxophone
He begins his musical studies at the Music School of the Musical Society “La Artística” in Buñol. Member of the Big-Band “D´jam” and of the Jazz Orchestra of the Central Theater of Seville since its foundation, he has performed as a freelance and soloist with musicians such as Mike Smith, Terry Landry, Pedro Iturralde, Perico Sambeat, Jaime Serradilla, Manuel Calleja, Antonio Mesa, Mike P. Mosman, Melker Isaksson, at the Central Theater of Seville, Marchena Jazz Festival, Punta Umbría Jazz Festival, Morón de la Frontera Jazz Festival, “Jazz in the province ”of Seville, Palau de la Música in Valencia, National Auditorium of Madrid and Gran Teatro de Huelva. As arranger and Director of the Big Band of the project Crecer Cantando, Crecer Soñando for the Department of Education of the Junta de Andalucía, he has collaborated in various initiatives, participating in the development of various didactic units for Primary and Secondary.
He has been a member of the Symphonic Band of La Artística de Buñol since 1982 and a solo saxophone of the group since 1988.

Daniel Orts – Piano
Active professional pianist and composer. He is the leader and sideman of various musical projects in the city of Valencia, mainly within the sphere of jazz, contemporary music, folk and world music. Disciple of musicians of the stature of Fabio Miano, Albert Sanz, Enrique Pedrón or Alberto Palau, he has training in the Piano-Jazz specialty at the Superior Conservatory of Valencia. He has shared the stage with, among others: Perico Sambeat, Ramón Cardo, Albert ‘Bertomeu’ or Peter Bernstein. He has performed in multiple venues (Jimmy Glass Jazz Bar, Café Mercedes Jazz), has participated in festivals (Jazz en la Serranía, Jazz al Castell, Trovam) and has extensive experience in cocktails, entertainment and corporate events.

Ricardo Osorno – Double Bass
Electric bassist and double bass player, composer and producer of Colombian origin. He currently lives in Spain where he has been developing his musical and professional career in recent years. During this season, Ricardo has finished his Master’s studies in Contemporary Performance with an emphasis in Production at Berklee College of Music on the campus of the city of Valencia, under the instruction of renowned bassist Gary Willis. He also completed the Post Master Fellowship program, in which he worked as a house bassist at the same university’s studios. As a performer, Ricardo has had the opportunity to play with great renowned artists such as Roberto Quintero, Nitin Shawney, Víctor Mendoza, Albert Sanz, Timotej Konik, Casey Driessen, Bobby Martinez, and Sergio Martínez, among others.
After fifteen years of experience as an accompanying bassist in groups and projects around the world, he decided in 2019 to develop his own quintet proposal by recording his first album: Introspection. In nine original songs, Ricardo imprints his traditional roots and his training in Jazz with the influence of different cultures that have surrounded his music. It’s a fresh and heartfelt album that takes an inward journey only to bring fresh and inspiring sounds to the surface.
In parallel to his career as a bass player, Ricardo also has 10 years of experience in music education, which he reflects in his constant online pedagogy projects. Currently, Ricardo Osorno works as a performer, session musician, arranger and musical director for different artists such as Lili del Sol and Carolina Araoz. He is also a producer for the OYE! Collective Podcast.

Manuel Ernesto Montañez – Drums
Graduated in Music from the National Experimental University of the Arts of Caracas, Venezuela, he is studying the Master contemporary Performance Berklee College of Music Production Concentration at the Valencia Campus. From 2011 to 2015 he is professor of the Chair of Academic Percussion, of the Chair of Drums and Director of the Big Band Jazz San Antonio of the Simón Bolívar System of Children’s and Youth Orchestras, Núcleo San Antonio de los Altos, Edo. Miranda.
He has studied with Andrés Briceño or Gerry Weil, participating in various European tours and jazz festivals such as El Hatillo. In March 2015 he published his first album “Improvisto”. He is currently pursuing a Doctorate in Music Didactics at the University of Valencia.