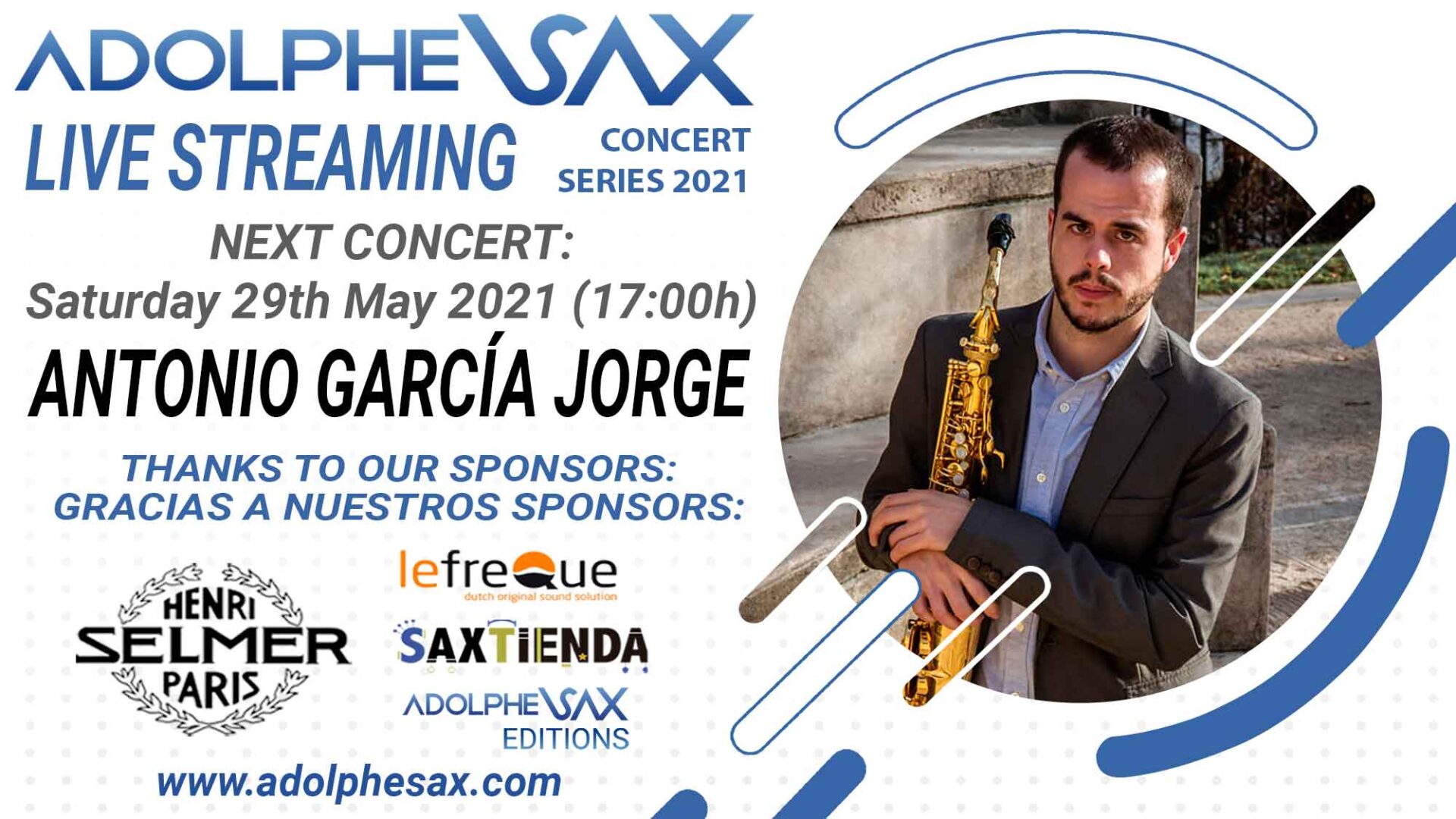 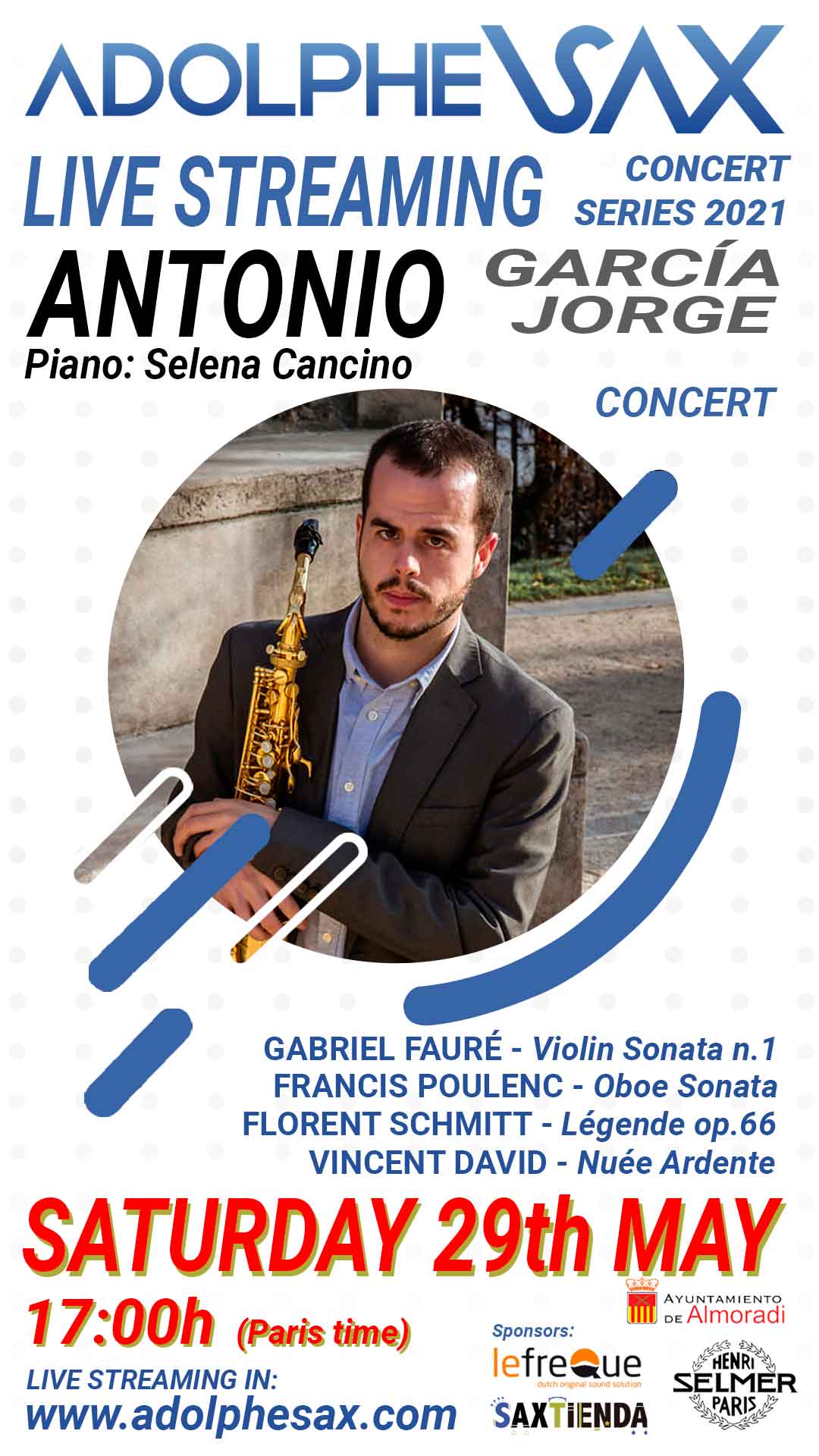 BIOGRAPHY
.
This Segovian saxophonist graduated from the hand of Juan Clemente at the Conservatorio Superior de Salamanca. After training for two years with Vincent David at the CRR of Versailles (France), Antonio enters the prestigious National Conservatory of Music and Dance of Paris (CNSMDP) where he is studying for a Master’s degree in the class of Claude Delangle. Similarly, he is completing a second Master’s degree in chamber music in David Walter’s class with the training that he co-founded and with which he performs numerous concerts, recordings, projects and broadcasts on Radio France: the Quatuor Yendo. To finish his studies in France, he completed the third cycle (DAI) of contemporary music and creation with Hae-Sun Kang at that center. Antonio collaborates with IRCAM in Paris and works with composers such as Fredy Vallejos, Joan Magrané, José Manuel López-López, Frédéric Durieux, Gilbert Amy, César Camarero, Naoki Sakata, José Luis Escrivà and Luis Naón.
.
During his years as a student, he was awarded in numerous international competitions in Spain, Italy, Croatia, France or Andorra and awarded the Prize for Musical Interpretation of the College of Spain in Paris and the INAEM 2014. At the same time, he is a supported artist by INJUVE and the Spanish Ministry of Education, the Jeunes Talents association and the French foundations Meyer, Tarrazi and Société Générale.
.
He performs various concerts as a soloist with the National Classical Orchestra of Andorra, the CNSMDP Orchestra, the Zagreb Symphony Orchestra, the Kammart Ensemble, the Croatian RTSO, the Enigma Group, the Extreme Sound Ensemble or the Dubrovnik Symphony Orchestra, among others. Similarly, and attracted by orchestral music, he regularly collaborates with the Castilla y León Symphony Orchestra, the Galicia Symphony Orchestra, the Murcia Region Symphony Orchestra, the ADDA Simfònica and the National Orchestra of Lyon.
During his career, he performed concerts in the most important concert halls of France, Italy, China, South Korea, Croatia, as well as the national territory. Actively participates in various festivals of great importance such as the Jeju International Wind Ensemble Festival, the Soriano Musical Autumn Festival, the Segovia Music Festival (MUSEG), the CNDM Current Music Cycles, the Bilbao Music-Music Festival and in Congresses Saxophone World Cups in Strasbourg (2015) and Zagreb (2018), where he plays as a soloist at the opening concert.
.
At present, Antonio combines his artistic activity with teaching as Professor of Saxophone by opposition at the “Massotti Littel” Superior Conservatory of Music in Murcia. The artist of the prestigious brands Henri Selmer Paris and Vandoren Paris.
previous post