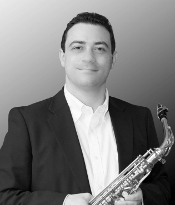 Jérôme Laran began studying the saxophone at the age of nine. His studies with Claude Delangle at the Conservatoire National Supérieur de Musique et de Danse de Paris lead to a unanimous First Prize in 2002. He pursued postgraduate studies in Paris and obtained the nationalCertificat d’Aptitude teaching diploma in 2005. His numerous prizes and awards include the ADAMI association’s “Révélation Classique” in 2004 and a fellowship with the Cziffra Foundation. He has received support from the Sasakawa and Meyer foundations as well as Société Générale’sMécénat Musical.

Laran was unanimously awarded first prize at the International Saxophone Competition in Luxembourg (2000), and later competed in other international music competitions, including the A.R.D in Munich (2001), and the Concours International Adolphe Sax in Dinant (2002). Laran’s successful performance career has brought him to some of the most renowned concert venues in Europe (Philharmonie in Berlin,Cité de la Musique, Salle Gaveau, Musée d’Orsay in Paris, Victoria Hall in Geneva) as well as China, Canada, and Japan (Suntory Hall, Tokyo, Bunka Kaikan, Opera City, Partenon Tama).

Laran is Professor of Saxophone at the Aulnay-sous-Bois Departmental Conservatory and is frequently invited for masterclass appearances in Europe and Asia (Japan, China, Taiwan).