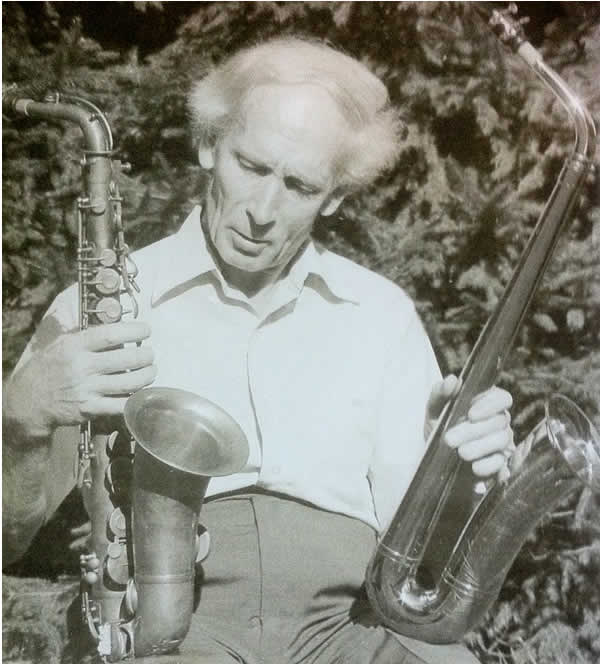 A day like today, May 15, 107 years ago Sigurd Rascher was born in Germany

Sigurd M. Raschèr was born in Germany in 1907. He received a diploma from Stuttgart Musikhochschule in 1930 and intended to enter upon the career of a professional clarinettist, but changed to the saxophone, on which he became one of the world’s greatest performers.

Raschèr’s musical background, in addition to the rigorous training received at the Academy of Music, from which he graduated, includes experiences as a band musician and as a teacher in primary schools.

In 1934 he was appointed teacher of saxophone at the Royal Danish Conservatory, Copenhagen, and later acted in a similar capacity at the conservatory in Malmö, Sweden. He became so identified with the musical life of Denmark and Sweden that he has been called a Scandinavian musician. In the USA he has taught at the Manhattan School of Music, the University of Michigan and the Eastman School of Music; and he has given courses at many other universities and colleges.

Concert tours have occupied much of his time and attention since 1932 – he has been heard in all the important musical center of Europe, and even in remote Australia and Tasmania (1939 and 1959). His American debut took place in 1939 with the Boston Symphony Orchestra; he has appeared several times with the New York Philharmonic Orchestra, as well as with the Philadelphia Orchestra, the Cleveland Orchestra, the National Symphony Orchestra, and many other orchestras in this country, in Europe, etc.

Raschèr’s success in extending the range of the saxophone, coupled with his phenomenal control of tonal gradations, his amazing technique and supreme musicianship, have attracted the attention of serious composers. The list of those who have written music for him includes Bentzon, Borck, Brant, Coates, Cowell, Dahl, Gläser, Glazounov, Hába, Hartley, Hindemith, Hlobil, Husa, Ibert, von Koch, Lamb, Larsson, Martin, Milhaud, Osterc, Wirth, Worley, and many others.

Concerning the artistic possibilities of the saxophone, Raschèr points out that Adolphe Sax, its inventor, had in mind an instrument that should be as flexible as a string instrument and as powerful as one of the brasses. It was to possess great technical agility and an expressive power equal to that of the cello. In developing his own facility, Raschèr has endeavored to approach as nearly as possible the high ideals of the saxophone’s inventor. His success has been considerable.

Raschèr, whose expressive power over a gamut of colors includes that of the flute, oboe, clarinet, horn

and bassoon has shown that the seeming upper limit of the saxophone’s range is due to lack of ability on the performer’s part, and is the fault of neither the instrument nor its inventor.

That Raschèr has achieved phenomenal success in approaching the ideals of Adolphe Sax, with regard for the tonal and technical capabilities of the saxophone, is attested to by the fact that in 1938 he received a photograph of Sax from the inventor’s daughter, then more that eighty years old, with comment to the effect that, at a concert in Strasbourg, she had heard Raschèr play the saxophone as she believed her father had imagined it should sound.

Dr. Rousseau’s performance and master class calendar in Italy 26-29 May