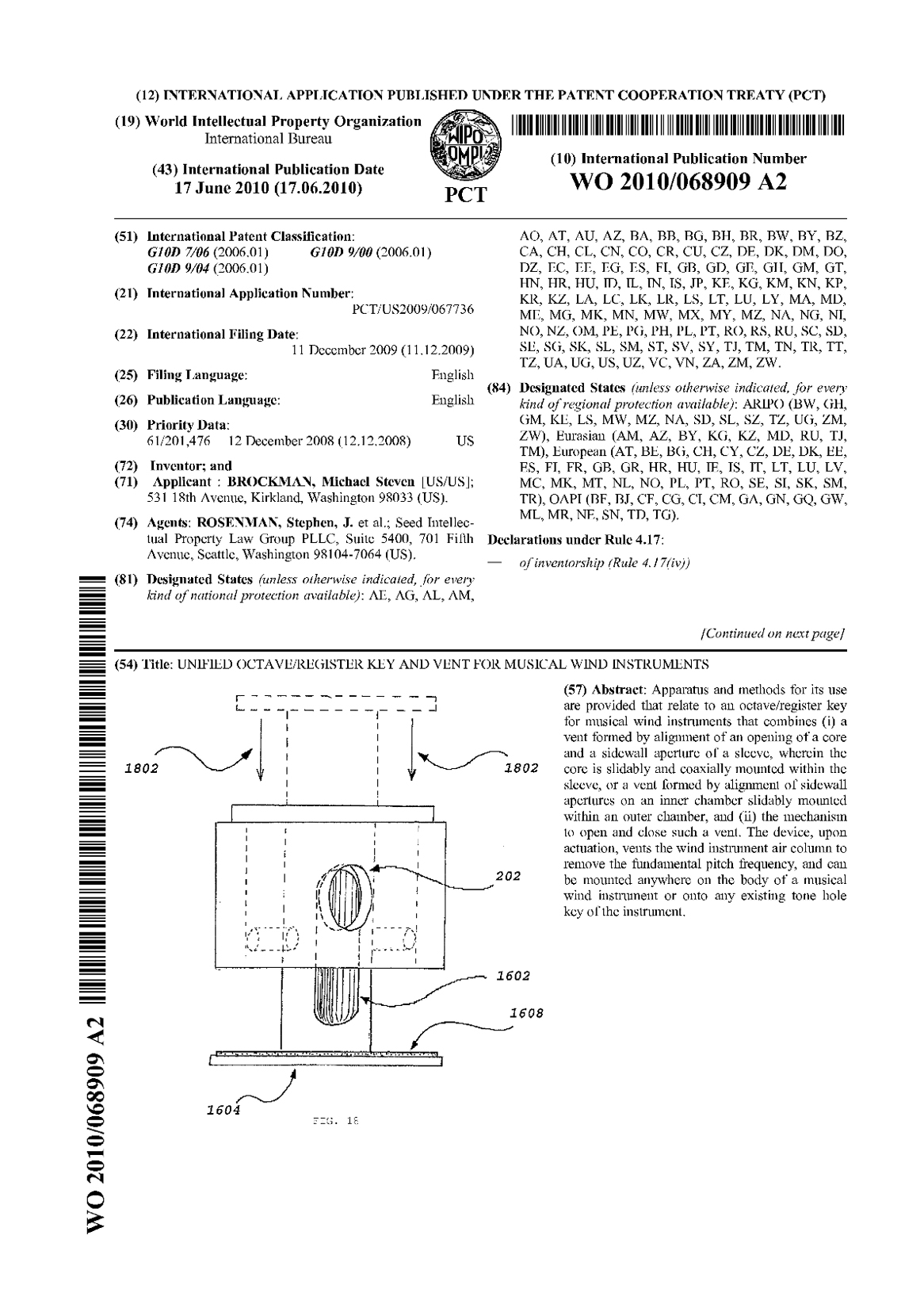 This invention is based on priciples discussed in the “Frankensax article” as published in the Mar/April 2009 edition of The Saxophone Journal (PDF format).

Woodwind instruments, such as the saxophone, are essentially long tubes. They operate when air is blown over a reed or sharp-edged surface, causing an air column to vibrate inside the tube. Along the instrument are a number of large holes; closing the holes (with a finger or by pressing a lever or key) lengthens the air column and creates a lower sounding note. On the saxophone, the player can also press an octave key that causes the note to jump an octave (say from low C to middle C–like moving up eight white keys on a keyboard), by allowing a very small amount of air to escape through a vent at a strategic location along the horn. But that octave key creates intonation problems.

The saxophone has a conical bore that begins with a narrow opening at the mouthpiece and flares dramatically over its length. It is harder to keep in tune than the more predictable flute and clarinet, which have narrower bores that are cylindrical. In fact, intonation challenges with the saxophone may be part of why it is not a standard symphony orchestra instrument. It fits more easily into the jazz genre, which incorporates more flexibility in pitch (something at which the saxophone excels).

Here’s how it works: A small vent is drilled anywhere along the body of a saxophone where an octave key is desired. To avoid permanently altering the instrument’s main body the small vent can be drilled through any existing key on the saxophone. The Broctave Key, a piston-operated mechanism, sits on top of the newly-drilled vent and gives the saxophonist the option of using it for some of the notes that are most likely to be out of tune, such as middle D. Using a piston instead of a lever solves space problems and simplifies installation. Brockman sees a future when the Broctave Key is sold as an option with all saxophones. If the Broctave Key is mounted onto an existing key, the player can switch back and forth between the standard key and the one with the new Broctave Key attached, as performance situations require. Though the piston could be applied to any key, Brockman considers the high D key to be the most likely candidate because of its heavy use in saxophone repertoire and the challenge of playing the note D in tune.

The Broctave Key is now in its third iteration, each a refinement in design and materials. The first was made out of brass tubing and lamp parts; the second, steel pinions modified with files, drills and power tools to fairly precise standards. The patented version will be brass, machined to exact specifications. He’s learning computer-aided design software so he can turn manufacture over to a professional machine shop.

“Of course, part of becoming a musician is developing tricks to overcome the limits of your instrument, but if a simple key can deliver spot-on intonation for a troublesome note, I want it! ” he says.

Brockman became fascinated with saxophone design and acoustics as a student of Joe Allard, his mentor at the New England Conservatory of Music in the 1980s and one of the most renowned saxophone instructors in the world.

Even competent young musicians entering the UW’s competitive saxophone program can be too casual about intonation, but after listening to Brockman’s carefully tuned notes they come to appreciate its importance. And, because he’s been a student of saxophone intonation and acoustics throughout his career, he can teach his UW students the physics of playing in tune, so they can solve these problems on their own.

“I tell them ‘Someday you’ll have the Broctave Key for that note, but for now you’ve got to master your instrument, and that may mean gingerly opening one of those natural octave keys.’’’

Remodeling a saxophone might be a daunting task for the average weekend handyman. But it was nothing new for Brockman. Tinkering in the workshop goes back generations. His Russian-born grandfather brought his building and repair skills to this country when he immigrated in 1915 and he passed those skills to Michael’s father. When Brockman was ten years old and just beginning his interest in the saxophone, he and his father completely dismantled a saxophone to clean it up, and “to see how the thing worked.”

“We carefully labeled each part and where it went so we could get the instrument back together,” he says. “Their attitude ‘was why buy something new when you can fix what you have?’ I have that same attitude.” Fixing the saxophone became an obvious project for a musician who finds relaxation at the workbench.

“There were hundreds of parts, and we carefully labeled each one and noted where it went so we could get the thing back together,” he says. “The attitude of my elders was: why buy something new when you can fix what you have? I have that same attitude.” Improving the saxophone became an obvious project for a musician who finds relaxation at the workbench.

Though drilling holes in a saxophone didn’t faze him, applying for a patent did. “It’s not for the faint of heart. Once the process starts you have to move very quickly to get everything done in a year.” Now, with the patent secured, Brockman is looking for local companies to manufacture the key, and professional colleagues around the world to use and endorse it. And, not surprisingly, the musician-inventor has more saxophone-related creations in mind; he’ll soon be back at the workbench cutting, drilling and soldering an altogether new type of saxophone for the future.

Miguel Zenon – What Is A Polyrhythm? Beats Taking Turns

NEW SCORES for saxophone during 2015