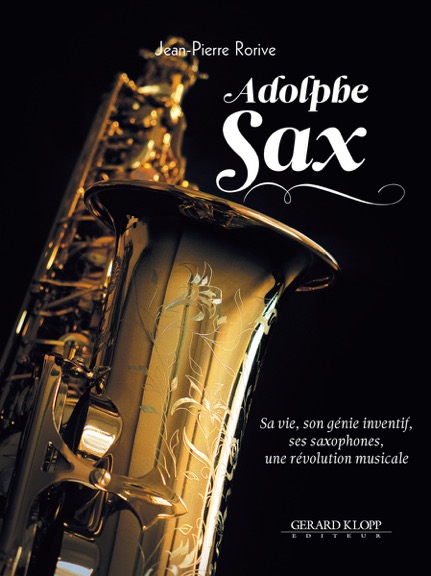 His life, his creative genius, his saxophones, a musical revolution/ Jean-Pierre Rorive, dr of History and saxophonist (Liège, Belgium)

The most complete, illustrated and luxurious book about Sax and saxophone

A superb and essential book (Claude Delangle, professor at the Paris Conservatoire)

I have already purchased this book, and though I have not finished reading it yet, it looks to be an outstanding contribution to the research on Adolphe Sax and the saxophone. The artwork is simply stunning, and by itself would merit purchasing the book. (Clifford Leaman, NASA director)

This great Sax adventure, so meticulously documented, is so captivating that we read it as a entertaining novel. (Preface, Steve Houben, saxophonist jazzmen, director of the Liège royal Academy)

Adolphe SAX – His life, his creative genius, his saxophones, a musical revolution

Born 1814 in Dinant (Belgium) and deceased 1894 in Paris, Adolphe Sax is recognized as being one of the greatest inventors of the 19th century. He is also one of the most revolutionary instrument makers in the history of music. He improved to the point of perfection most instruments of his era, and invented many others, mainly the saxophones.

His life reads like a novel. Starting from nothing, and flirting with poverty, Sax rapidly attains fame and regularly associates with the famous composers of the romantic era including Liszt. Rossini, Berlioz and Meyerbeer extol the genius of the prophet who had been awaited to fulfill the dream of an orchestral revolution. With the same enthusiasm Napoléon III embraces his reform of military bands as well as his instruments, immediately following with the fanfares and civil orchestras.

In addition, this richly illustrated work evokes the impressive authority and impact of the saxophone in musical styles as different as classic, military or jazz.

The Belgian historian Dr. Jean-Pierre Rorive, author of several acclaimed historical books and excellent saxophonist (First Prize of the Royal Conservatory of Liege) had already delighted us with his remarkable book “Adolphe Sax, Inventeur de genie” (in French) published in 2004. His second book on the Belgian inventor Sax who revolutionized the musical world is really exceptional, not in the least because of its unique and wonderful illustrations but also because of the interesting contents with numerous new and rare information. In seven chapters, the author deals with the varied aspects of Sax’s adventurous life and the turbulent history of his numerous, often surprising, inventions. First we have the rather turbulent youth of the inventor set against the interesting background of the musical life in Belgium in the first half of the 19th century. The first years in Paris with both support and adversity are clearly described and so are the financial problems (the first of a long series to come) as well as the first successes. The provisional success with the French military bands as opposed to the immediate success with the Belgian military and civic wind bands is clearly demonstrated. The ups and downs experienced by the courageous inventor in Paris, including bankruptcies, illness, lawsuits and other treasons on the one hand and successful patents and national and international awards on the other hand are explained in depth. Another chapter deals with the last decades of Sax’s life with a view on his teaching and publishing activities and financial collapse. A sixth chapter reveals his other inventions, refinements and projects. The final chapter gives a rather complete account of the genesis, development, evolution, use and multiple applications, in military, symphonic and jazz music, of the saxophone. The rich, quite purposeful, bibliography will obviously also be most useful. We cannot enough emphasize the quality, diversity and often exclusiveness of the magnificent and extremely rich illustration. Dr. Rorive provides us with a most valuable addition to the literature dealing with Adolphe Sax. This very nice and most informative book should not only be an ideal present at the end of this “Sax Year” but is a must for all wind music fans.

Medal for the saxophone and a brilliant saxophone’s First Prize at the Liège Royal Conservatory. He participated in the World Saxophone Congresses in Chicago, Tokyo,Nuremberg, Pesaro and Montréal. He has released 20 “saxophone and organ/piano” albums.

The Techniques of Saxophone Playing by Marcus Weiss, Giorgio Netti