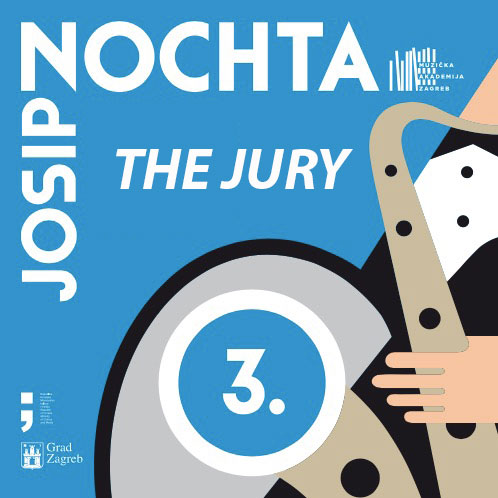 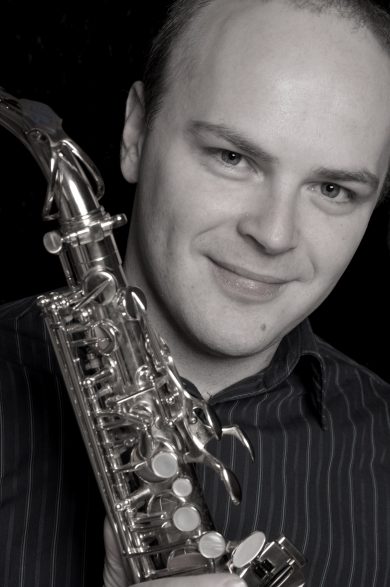 Vincent David is the leader of a generation of saxophonists who develops the musical and technical possibilities of his instrument.
As soloist, he has performed with Philharmonique Orchestra of Radio France, National Orchestra of Strasbourg, Helsinki Philharmonic Orchestra, National Taiwan Symphony Orchestra, Philharmonic Orchestra of Stuttgart, MAV Orchestra of Budapest, Navy Band Orchestra of Washington, Camerata Aberta of Sao Paulo, Musica Assoluta of Hannover. Scottish Chamber Orchestra, and many others. He collaborated with many composers Luciano Berio, Pierre Boulez, Peter Eötvös, Gérard Grisey, Philippe Hurel, etc.
He works since 1998 with concerts Intercontemporain Ensemble, the Philharmonic Orchestra of Radio France, and the Orchestra of the Paris Opera.
Composer and conductor, he has composed for his instrument, solo pieces such as Sillage for soprano sax, Pulse and Éclats d’échos for alto saxophone, Mirages for soprano saxophone and piano, Nuée Ardente for alto sax and piano commissioned by the International Adolphe Sax competition in Dinant, l’éveil de la toupie and concertos Reflets for alto sax and orchestra, Arches for soprano sax and orchestre, Rhizome for alto sax and strings. He has also written Jazz duets and quartets.
He is active in improvised music (jazz, contemporary) through encounters with musicians such as Pierrick Pedron, Christophe Monniot, Jean-Charles Richard, sometimes giving rise to recordings. He is the founder of the Fireworks Quartet with Jean-Charles Richard, Stéphane Guillaume et Baptiste Herbin and record his music.
Vincent David has given numerous masterclasses throughout the world. He is a recognized teacher and attaches importance to the transmission of his experience and his passion for music. Generous musician, he is very attached to the opening and promotes artistic curiosity in his class. Since September 2019 teaches at the Conservaroire Royal of Bruxelles. 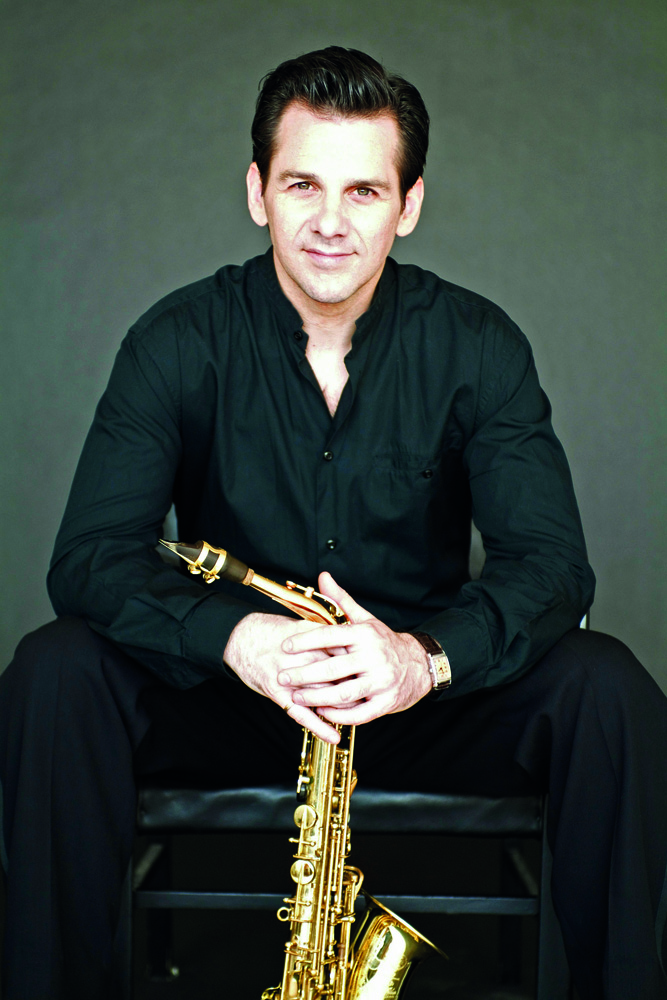 After studying at both Conservatoire de Musique de Montreal (Canada) and Bordeaux (France) Daniel Gauthier completed his studies at the Université de Montréal where he earned a doctoral degree.
At the age of twenty-four Gauthier became the first saxophonist to win the Grand Prize at the International Stepping Stone of the Canadian Music Competition. In addition, he was a laureat at the Ancona International Music Competition in Italy.
Gauthier has performed in Canada’s major cities as well as in Washington (D.C.), Newport, Seoul, Tokyo, Osaka, Buenos Aires, Paris, Munich , Berlin, Hamburg, Verona, Roma, Madrid, Athen, Ljubljana, Istanbul, Amsterdam, Moscow, St Petersburg, Tallinn, Sydney, Melbourne, Perth, Salzburg etc.
Gauthier presented master classes in almost all european music capitals and also served as a jury member on all most important international saxophone competitions in the world.
In 1997 he was appointed to a professorship at the Detmold Faculty of Music (Germany). In 2003 he changed to the Cologne Faculty of Music.
In 2000 and 2006 Gauthier was elected member of the International Saxophone Committee.
As soloist he played among others with the Beethoven Orchestra Bonn, the Staatskapelle Weimar, the Radio Orchestra Stuttgart, the Lubljana Radio Orchestra,  l’ Orchestre Métropolitain du Grand Montréal, the Orchestre Symphonique de Laval, the Jena Philharmony Orchestra, the Aachen Symphony Orchestra, the Sinfonietta Cologne, the Orchestre Symphonique de Trois-Rivières, the WDR Rundfunk Orchestra Cologne, the Südwestfalen Landes Orchester, the Capella Istropolitana, the Folkwang Chamber Orchestra Essen, the Würtembergisches Chamber Orchestra.
In the last years he was especially successful with the Alliage Quintett that he founded in 2004. With this chamber ensemble he appeard several times on differents European TV Net-work and the group recorded five cds for the label SONY classical.
He received three times the famous german CD Award Echo klassik, with the Alliage Quintet in 2005 (for Una voce poco fa) and 2014 (for Dancing Paris) and as soloist in 2006 (for Spirito latino) . 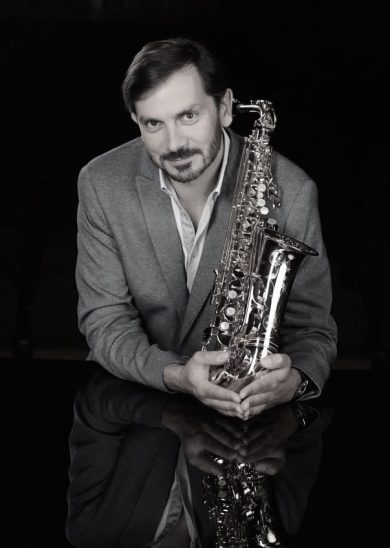 Paweł Gusnar is a chamber and session musician and educator, professor at the Fryderyk Chopin University of Music in Warsaw and the Grażyna and Kiejstut Bacewicz Academy of Music in Łódź. He studied saxophone performance at the Karol Szymanowski Academy of Music in Katowice and the Fryderyk Chopin Academy (now University) of Music in Warsaw. In 2016 he was elected deputy vice-chancellor for foreign contacts at that University.
As a versatile artist open to many styles and forms of expression, he is one of the few saxophone players to be active as a high-class performer in all the three fields – classical, jazz and pop music. His unique contributions to the composition and promotion of Polish music for the instrument include about a dozen Polish and foreign premieres every year. More than 70 works have been written specially for him by mostly polish composers. This number icludes around a dozen pieces with orchestra (by Krzysztof Penderecki, Bronisław Kazimierz Przybylski, Krzysztof Knittel, Nikola Kołodziejczyk, Bartosz Kowalski, Krzysztof Herdzin, Weronika Ratusińska and others) as well as some pioneering compositions setting new global trends. It is thanks to Gusnar that the Polish saxophone repertoire has found its way to major music centres worldwide. He also promotes Polish music by publishing a score series of his own name (The Paweł Gusnar Collection, publ. Ars Musica). 2018 saw the publication of his edition of Orchestral Studies for Saxophone.
As a soloist Gusnar has performed with numerous orchestras (Sinfonia Varsovia, NOSPR, the Polish Radio Symphony Orchestra, Sinfonia Iuventus, Amadeus, Concerto Avenna, Capella Bydgostiensis, Sinfonietta Cracovia, Sinfonia Baltica, the Polish National Radio Symphony Orchestra (PNRSO), Płock Symphony Orchestra, Elbląg Chamber Orchestra, Zagreb Philharmonic Orchestra, the Royal Northern College of Music (Manchester, Great Britain), Orchestra Valentiana (France), Lviv Chamber Orchestra Academia) as well as nearly all the philharmonic orchestras in Poland. Her regularly collaborates with numerous symphony orchestras including Warsaw Philharmonic, Sinfonia Varsovia and the Polish Radio Symphony Orchestra (POR) as well as jazz and pop bands such as Adam Sztaba Orchestra, Zygmunt Kukla’s Kukla Band, Tomasz Szymuś Orkiestra and Krzysztof Herdzin’s ensembles. As a session musician he has recorded numerous television programmes for Polish state television TVP as TVN, Polsat and other broadcasters.
His vast discography comprises more than 50 CDs, including solo and original programmes. Some of the highlights have been New Polish Music for Saxophone and Organ, Jazz Sonatas, Komeda Inspirations, Saxophone Impressions, Saxophone Varie, Saxophone Varie Vol. 2, (Re)Discovering Woodwind Masterpieces (the first Polish recording of Glazunov’s Concerto in E-Flat Major Op. 109) and Penderecki’s Concerto Per Sassofono ed Orchestra. Frequently nominated for the Fryderyk Award of the Polish Phonographic Academy, he won this award three times: in 2014 for Saxophone Varie, in 2015 for Paweł Łukaszewski’s Musica Sacra 5, and in 2016 for the album Verbum Incarnatum (a collaboration with the Mulierum Schola Gregoriana Clamaverunt Iusti – in the category of “Early Music Album of the Year”). He has also been nominated for the prestigious title of Coryphaeus of Polish Music (2014, 2015, 2017).
As an unquestionable authority in his field, he has been serve on competition juries and taught masterclasses at the world’s major music centres from South Korea, China, USA and United Arab Emirates to Ukraine, Croatia, Hungary, Czech Republic, Slovakia, Austria, Germany, Estonia, Belgium, Holland, Switzerland, Italy, France and Spain.
The artist collaborates with YAMAHA, BG Franck Bichon and D’Addario. 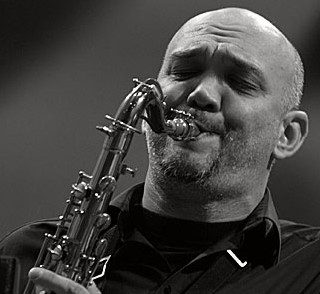 Saša Nestorović (Zagreb, 1964) is active on the US, German, Croatian and Slovene jazz scene. For decades he has led the Summer School of Jazz on the island of Brač and given lectures at the Summer School of Saxophone in Dubrovnik. He is a saxophonist, clarinetist and recording musician with the Croatian Radio Television Big Band, as well as composer and arranger with the Zagreb Jazz Portrait quartet. As a conductor, he has recorded 20 albums with a Jazz Orcestra HRT, has worked projects/recordings with eminent jazz musicians like Ernie Watts, Doug Richards, Rex Richardson, Christian McBride, Charles Toliver, Alan Broadbent, Miroslav Vitous, Boris Kozlov, Alexey Sipiagin, and many more. Most recently he did a concert with Vanessa Rubin playing Tadd Dameron’s music.
He is disting. prof. art at Music academy in Zagreb, teaching chamber music, jazz improvisation and leading the jazz ensemble. He was a colaborator of over than forty JazzLab workshops with names such as Charles Toliver, Miroslav Vitous and Jean -Luc Ponty, Eddie Henderson, Barry Altschul, Ambrose Akinmusire, Black Art Collective (Jeremy Pelt). He has mentored six graduating essays at final diplomas and teaches ensembles that were four time awarded in Croatia, Serbia and Italy.
He was a member of the EBU Big Band Orchestra (leading by Andrew Homzy) during a concert tour in Montreal and other cities of Canada in 1999 and has participated in many jazz recordings in Croatia and Slovenia.
Co-founder and member of Zagreb Saxophone quartet, he has had 13 tours – concerts and workshops in the United States and Europe and released many recordings, and in 2018 he was a jazz side host of the 18th World Saxophone Congress in Zagreb.