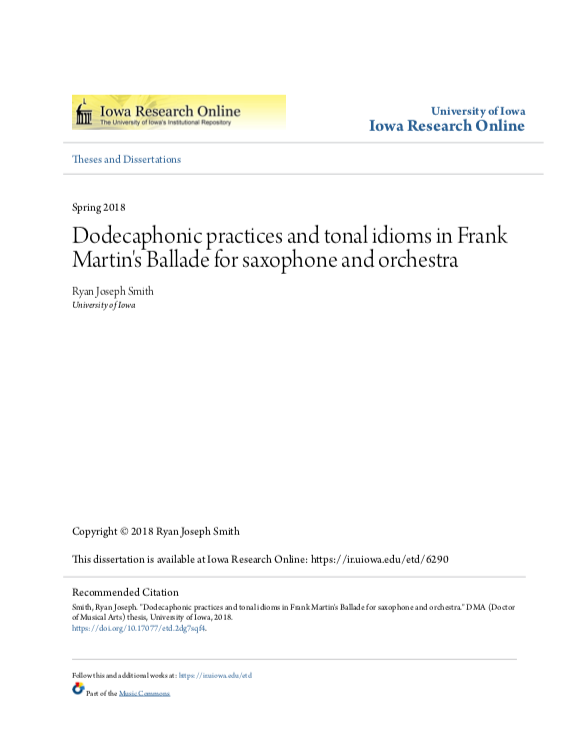 Frank Martin’s Ballade for saxophone and orchestra (1938) is an important piece in the saxophone’s repertoire, but it has received little attention from music scholars. It represents one of the Swiss composer’s first works in which he settled into the compositional style of his maturity—a style grounded in balancing conservative and modern compositional practices. This document offers the first detailed analytical study of the saxophone Ballade.

Much has been written about the interplay of dodecaphonic (twelve-tone) and tonal elements in Martin’s mature music. Composers often use twelve-tone practices as a way to systematically organize their music and circumvent tonal references by honoring a series of rigid guidelines established by Arnold Schoenberg in the 1920s. Martin incorporated many dodecaphonic practices into his mature style but refused to do so at the expense of his deeply held convictions regarding tonal harmony in music. This analysis of the saxophone Ballade presents a refined assessment of Martin’s twelve-tone practices, especially as twelve-tone, tonally-functional, and non-functional harmonic features of his music interact. In this regard, Martin’s dodecaphonic aesthetic shares a stylistic kinship with the music of Schoenberg’s disciple, Alban Berg, that has not been closely examined in the literature. This connection is demonstrated through a comparison of dodecaphonic practices in the saxophone Ballade with those used in Berg’s Lyric Suite. Finally, an appendix details a few suggestions for possible adaptations to the saxophone part based on those made by Martin in his arrangements of the work for flute and basset horn.