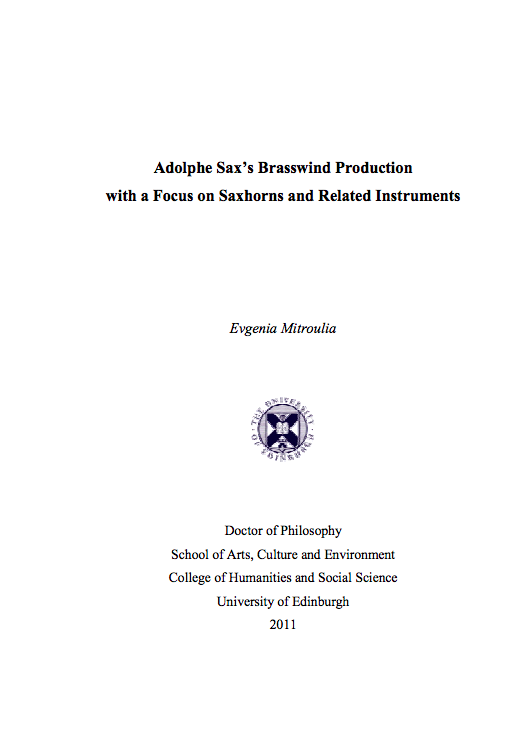 Adolphe Sax developed in Paris in the early 1840s a family of brass instruments, the saxhorns, which gained an immediate popularity in France, Britain and other parts of the world. The originality of saxhorns was challenged at the time through long-lasting litigations, and is still questioned by many researchers. This thesis investigates the development of the saxhorn from an organological standpoint. Saxhorns are examined in comparison to instruments predating them by other makers, along with relevant archival material (patents, lawsuit minutes, daily press, publicity material etc.) so as to reveal whether the allegations against their originality were sound. It is noticed that idiosyncrasies of intellectual property law of the time facilitated a strong interaction between musical instrument makers particularly of France and Britain. Instruments examined are Adolphe Sax saxhorns, saxhorns by other contemporary makers, mainly French and British, but not exclusively, as well as a number of related instruments, made before and after the development of Sax’s saxhorns. The assertions of Sax’s rivals are not fully confirmed based on the analysis of instrument measurements. It is also argued that the saxotromba family, so far considered extinct, is in fact represented by two members in the saxhorn family, the alto and the baritone.

A number of related instruments emerged around the middle of the nineteenth century in various wraps and with different names. These are compared to saxhorns and classified according to bore-profile properties. Only certain groups were distinct, whereas most were essentially saxhorns in different forms. Sax’s brasswind production as a whole is reviewed not only as an enumeration of his developments, but also to provide an assessment of the genuine innovation in his work.