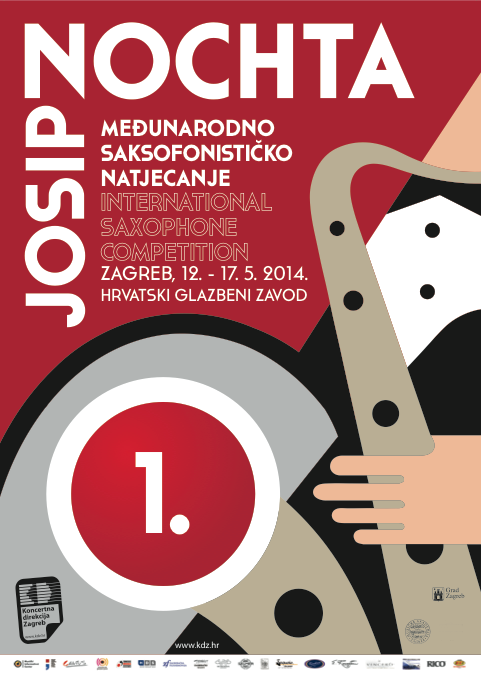 LINK WEB OFICIAL: http://www.kdz.hr/index.php/en/competitions/international-saxophone-competition-josip-nochtaNORMAS DEL CONCURSO1. The 1st International Saxophone Competition “Josip Nochta” will be held in Zagreb from 12th to 17th May 2014.2. All saxophonists born on 1st January 1982 and younger may apply.3. Deadline for submitting on-line applications or printed copies is February 15th 2014.

Postal address: KONCERTNA DIREKCIJA ZAGREB, “Nochta competition”, Kneza Mislava 18, 10000 Zagreb. The number of Candidates is limited. Candidates who apply earlier obtain preference.4. The Competition falls into three rounds:1st Round: 3 works in given order up to 20 minutes2nd Round: 3 works in given order up to 40 minutes3rd Round – The Finals: Two Concertos in given order accompanied by the Zagreb Philharmonic Orchestra5. The Competition is open to the public.6. Each application must contain the following:a) – a neatly completed application formb) – a recent photo (digital – 300 dpi)c) – copy of the passportd) – proof of the payment of 100 € paid to the bank account of Zagreb Concert Management at Zagrebačka banka d.d. Savska 60, 10000 Zagreb, IBAN HR9623600001101220533, BIC ZABAHR2X. In case of withdrawal, subscription money will not be reimbursed.e) – the score of the free choice work for the 2nd Round in PDF format; or as a photocopy sent by fax machine (+3851 4611807)

7. Any incorrect information in the application form will result in disqualification of the Candidate.8. Changes regarding the program written in the application form will not be permitted, except in case of necessity for the free choice work in 2nd Round.9. Only originally printed scores (if published) have to be used for competition.10. Official pianists will be available. Each Candidate is allowed a 20 minutes rehearsal for the 1st Round and a 60 minutes rehearsal for the 2nd Round. Eventual additional rehearsals should be settled directly between the pianist and the candidate. The candidate may bring his own pianist at his expense.11. Daily practice according to free place and time, as well as an acoustic check at the competition hall, will be provided for all candidates.12. The Finalists will have one rehearsal with the orchestra.13. The organizer reserves all rights for any kind of audio-video broadcast during all rounds of the Competition without any compensation to the competitors.14. The Jury reserves the right to stop any candidate whose program exceeds the agreed duration without consequences for Candidate’s placement.15. Performances will be held in alphabetic order starting with the letter S [es], the 1st letter in the word SAXOPHONE. The performance order in 2nd Round might be changed by Organizer (depending on the program and the schedule of pianists).16. All Candidates have to contact the competition office on May 11th 2014, not later than 8 P.M. (if not agreed otherwise by a special permit of the Organizer).17. The Candidates bear the charges for their travel, lodging and food.18. 10 Candidates chosen by the Jury will enter 2nd Round, and not more than 4 will proceed to the Finals.19. All candidates will be presented with Certificates of Participation and the Finalists will be presented with a Diploma.20. Possible complaints against Jury decisions will not be taken into consideration.21. By submitting the on-line application, or signing the printed application the Candidates indicate that they accept all conditions and decisions of the competition.22. In case of any ambiguities caused by translation, the Croatian text of the Competition rules is considered authoritative.LISTA DE OBRAS POR FASES1st Round:– each Candidate performs three works in the following order:a) Gordan Tudor: Quarter Tone Waltz – ed. Diapason – available through www.diapason.hr/b) Johann Sebastian Bach: 2nd Cello Suite BWV 1008 – Sarabande – reference urtext, transposition and phrasing on candidate’s choice, performance without repeatsc) a work chosen from the following list:Roger Boutry: Divertimento – ed. LeducAlfred Desenclos: Prélude, Cadence et Finale – ed. LeducClaude Pascal: Sonatine – ed. DurandLucie Robert: Cadenza – ed. BillaudotPierre Sancan: Lamento et Rondo – ed. Durand2nd Round– each of 10 Candidates performs three works in the following order:a) Dubravko Detoni: 22 per 2 in 2 for saxophone and piano – ed. Diapason – soprano or alto saxophone version on candidate’s choice – available through www.diapason.hrb) a Sonata chosen from the following list:William Albright: Sonata – ed. PetersFernande Decruck: Sonata – ed. BillaudotEdison Denisov: Sonata – ed. LeducJindřich Feld: Sonata for Alto Saxophone – ed. LeducJeanine Rueff: Sonata for Saxophone Alto Solo – ed. LeducTakashi Yoshimatsu: Fuzzy Bird Sonata – ed. Billaudotc) The work of the Candidate’s choice** If the chosen work is with piano accompaniment and the pianist, after having seen the score, comes to the conclusion that one rehearsal is insufficient for quality performance, the Candidate will be asked to propose another work.3rd Round – The finals (with Zagreb Philharmonic Orchestra):– each of 4 Candidates performs two concertos in the following order:a) Pavle Dešpalj: Concerto for Alto Saxophone and Strings – ed. Southern Music Pub. Co. (piano reduction)– ed.Splitsko filharmonijsko društvo (score) – available through www.mic.hr revised solo part you can download hereb) Concerto chosen from the following list:Jacques Ibert: Concertino Da Camera – ed. LeducLars-Erik Larsson: Concerto op. 14 – ed. GehrmansJeanine Rueff: Concertino for Alto Saxophone and Chamber Orchestra op. 17 – ed. LeducMIEMBROS DEL JURADOEugene Rousseau (USA), presidentArno Bornkamp, The NetherlandsClaude Delangle, FranceMatjaž Drevenšek, SloveniaDragan Sremec, CroatiaGordan Tudor, CroatiaPavle Dešpalj, Croatia (The Finals)